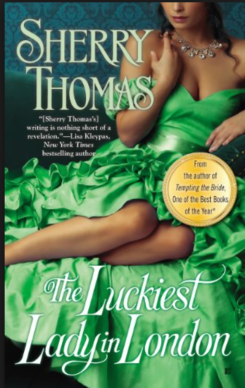 This was a rare treat of a book for one simple reason: I high-key hated both of the main characters and yet managed to ship their relationship the entire length of the book. I have never seen a regency novel where the mutual respect between the hero and the heroine is so obvious. Unfortunately, both of the main characters are definitely sociopaths. But apparently one hot Marquess sociopath + one social-climbing-wax boobed-sociopath = true love.

Felix Rivendale, the Marquess of Wrenworth, is rich, charming, well-mannered, and secretly a complete jackass that gets off on public adulation. He, by the rest of the ton, is considered the Ideal Gentleman.

Meanwhile. Louisa Cantwell has built a carefully laid out battleplan and donned wax boobs plan that she snag a man way above her position. She is manipulative, intelligent, and apparently is going on this husband hunting mission just to help her sisters.

When Felix proposes, Louisa has no choice but to say yes—after all, he has managed to scare off all of her other suitors. And so, the games begin.

What I really enjoyed about this book was how the love between Felix and Louisa grew slowly. While it was definitely lust at first sight, it wasn’t one of those books where the characters decide that they can’t live without each other in the span of two days. Instead, their love grew from their mutual appreciation of social manipulation and intelligence.

When you read as many Regency romances as I do, at some point they begin to blur together. However, this book stands out. It is much less fairytale-like and features much more complex characters than normal. Honestly, I don’t know how I feel about the difference. On one hand, it is refreshing. On the other hand, I definitely not want all Regency books to emulate this realism.

View all posts by Alexandria Jane